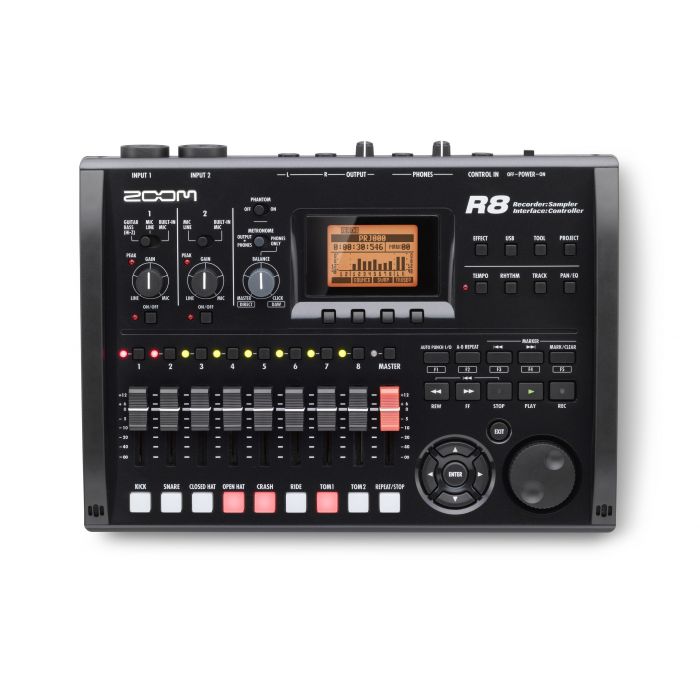 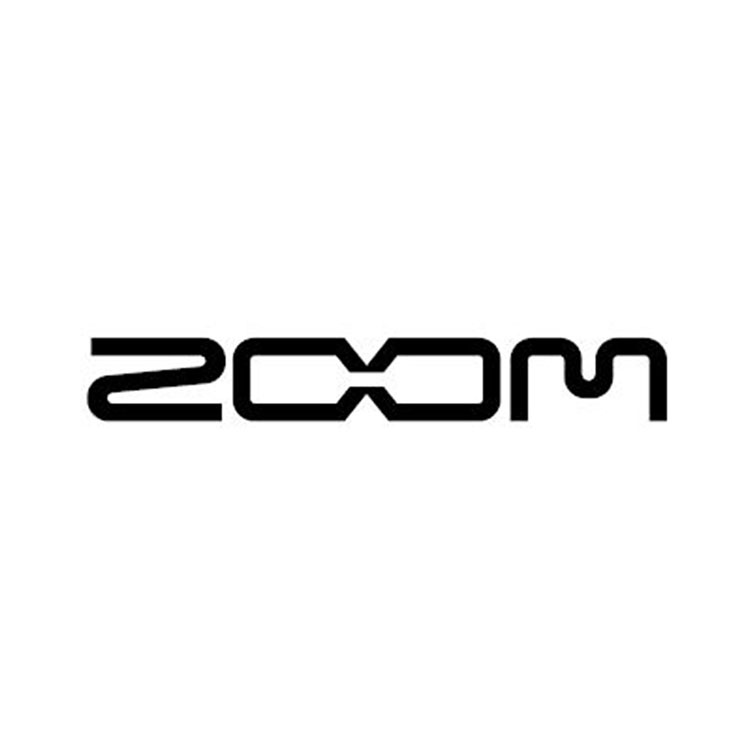 Zoom takes the turbocharged design of the R24 and scales it down for an ultra-portable music production solution. Like its predecessor, the R8 combines four production tools in one versatile device. In addition to being an 8-track recorder that utilizes SD memory, the R8 is an audio interface, a DAW control surface and a sampler complete with drum pads and a rhythm machine.

RECORDER
Simultaneous recording of 2 tracks and playback of 8 tracks
The R8 is the perfect tool for capturing audio on-the-go. Record live music performances, rehearsals, songwriting sessions or even audio for film and video. Playback up to eight tracks of audio at up to 24-bit/48kHz resolution as WAV files. If you make a mistake, use the UNDO/REDO function to cancel the last recording operation and restore the previous state. You can even mix down completed songs inside the R8 and save a mix for each project.

INTERFACE
Audio interface supports 2 inputs and 2 outputs
When combined with your computer, the R8 becomes a powerful audio interface. Connect the R8 to your computer via USB, launch your favorite DAW or use the included Cubase LE software and start laying down your tracks. Simultaneous 2-in/2-out capability allows you to record up to 24-bit/96kHz high definition audio. If you use the 44.1kHz sampling rate, the internal DSP effects of the R8 are also available for your computer tracks. A dedicated control lets you adjust the mixing balance between the DAW playback sound and the direct sound for monitoring.

CONTROLLER
Control surface functions for most DAW software
The R8 can be used as a control surface for DAW transport functions (play, record, stop) and mixing operations. Through a USB connection, you can control the transport and mixing functions of major DAWs such as Cubase, Logic, and Sonar from the R8. In addition, you can easily move multiple faders at the same time. No more mixing with a mouse! The R8 makes mixing a pleasure.

SAMPLER
8-voice sampler with 8 pads
The built-in sampler functions allow you to loop audio data on any track. You can play the pads in real-time and combine loops to create a performance for an entire song. When setting loop intervals, you can see the waveforms for visual confirmation. Time-stretching, which allows you to change the tempo without changing the pitch, and trimming the unneeded parts of loops, is also possible. You can use the sampler and recorder functions together seamlessly to play back loop tracks while recording instrumental performances on other tracks.

Over 140 DSP effects, including guitar amp modeling
The DSP effects, which include 146 types and 370 patches, can be used for recording, mixing and mastering. Insert effects are comprised of seven modules and include algorithms for guitars, basses, vocals and other sounds. One insert effect can be used simultaneously with the two types of send-return effects. 18 types of guitar amplifier models from our best-selling G2Nu and 6 types of bass amp models are included, so you can re-create a realistic amp sound simply by connecting a guitar or bass directly to the R8.

Supports SDHC cards with capacities of up to 32GB
The R8 uses compact and readily-available SD and SDHC memory cards as recording media. Unlike tape and disk recorders, this unit has no motor, making it more resistant to physical interference and concerns about mechanical noise.

Locate functions make editing easier
Set up to 100 markers and directly move to them whenever you want. Also, use the A-B repeat function to play or re-record a designated interval and use auto punch-in and punch-out for efficient editing.

Rapid file transfer with Hi-Speed USB 2.0
The R8’s Hi-Speed USB 2.0 port allows WAV-format audio files recorded on the R8 to be sent to a computer smoothly and rapidly. Use the R8 with a computer for additional music production, including editing with DAW software, creating original CDs and importing WAV files.

Versatile inputs for guitars, mics and line sources
The two balanced XLR-1/4-inch combination inputs can provide phantom power, so you can use studio-class condenser microphones to make professional-level recordings. One channel also includes a Hi-Z switch, allowing guitars, basses and other high-impedance instruments to be recorded.

Tuner and metronome functions
The R8’s built-in tuner is great for quickly tuning instruments and checking vocal pitch. The metronome can provide a click track for a drummer during recording and is also useful in practice settings. The metronome can also be sent to just the headphones. This allows you to play along to backing tracks previously recorded on the R8.

Powered by an AC adapter, batteries or USB bus power
Power options provide flexibility for different situations. Power the R8 on its own in one of two ways—with the included AC adapter or four alkaline AA batteries. The R8 operates for over 5 hours on batteries, plenty of time for most field recordings. When using the audio interface or control surface functions, the R8 can be powered by the computer’s USB bus.

Easy hands-free operation
Using a ZOOM FS01 footswitch (sold separately), you can control the recorder transport (play, stop, rewind), punch-in for recording and change effect patches with your foot. With the R8, you can easily record without ever taking your hands off your guitar.

Steinberg Cubase LE DAW software included
Cubase LE is a powerful music production software for recording, editing and mixing both audio and MIDI tracks. Cubase LE uses an audio engine that is equivalent to software that have received numerous awards and is an ideal introduction to computer-based music production.

* USB hub is not supported. * Intel® Chipset is recommended.